Engineered specifically to overcome the growing challenge of selective trout, Waterwisp flies represent a quantum leap in fly design. They are specially built to present the most natural profile. They ride higher, float longer, and work better than ordinary dry flies. Because of their patented design and balance, Waterwisp flies land upright and are virtually splash proof. Even inexperienced flyfishers will find them almost impossible to drown with a less-than-perfect cast.

More and more of today's dry fly fishing is catch and release for increasingly educated trout. Angling pressure results in cautious, fussy fish demanding perfect immitations and floats. On how many blue-ribbon waters do good fish turn away because the fly doesn't have a convincingly natural presentation?

Waterwisp responds to that challenge with: "A new, exciting fly... a radical departure from conventional fly-tying" — Fort Collins Triangle Review

Waterwisp is designed to fool the wariest trout. It lures them to the surface even when hatches are sparse or absent. Available in mayfly, caddis, stonefly, and terrestrial patterns, Waterwisp flies help reduce the odds in the already unequal struggle between wily trout and hopeful flyfisher.

Take a good look at Waterwisp. It appears to be tied backwards and upside down. The eye is at the tail of the fly, The hook faces up and is hidden by the hackle. From above, Waterwisp looks funky -- like a fly without a hook. From below, it looks uncannily like an insect just alighting on the water. Hence the name -- Waterwisp.

Look closer. The Waterwisp body curves like the real thing. The wings rise or lie back naturally. The hackle is soft and supple. The tying is precise, correct, and durable. The special highcarbon steel hook is specifically shaped for balance, presentation, and secure hooking.

But Does It Work?

Tie on a Waterwisp. Loop it out. See how easily it casts. Observe it drift lightly down to the water. Note how it lands softly, hook and hackle up, balancing and bobbing on the surface like a natural insect.

Why does Waterwisp float so well? For two reasons. First, its weight is evenly distributed along the length of the shank. Second, and equally important, no hook point breaks the surface tension of the water.

Watch a subsurface trout spot a Waterwisp, rise purposefully to the surface, and suck it in. Play the fish to net. Note that Waterwisp remains firmly set in the upper jaw through jumps and runs, but disengages easily to release the fish. Remember also that fish hooked in the upper jaw tend to tire sooner, limiting the dangerous build-up of lactic acid, and so recover faster on release.

Waterwisp has been tested by guides against selective trout on some of the most demanding U.S. waters. Their unanimous opinion: "Awesome.""Incredible." "Unbelievable." "Brings fish up even when they're not rising for anything else." In fact, Waterwisp flies are so realistic that trout often seem to prefer them to even smaller natural insects of the same type when floating side by side.

That's why serious anglers are already calling Waterwisp the dry fly for the 21st century. 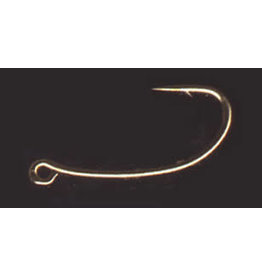 Waterwisp Waterwisp Hook
Add to cart
Waterwisp Hook
$7.50
By using our website, you agree to the use of cookies. These cookies help us understand how customers arrive at and use our site and help us make improvements. Hide this message More on cookies »